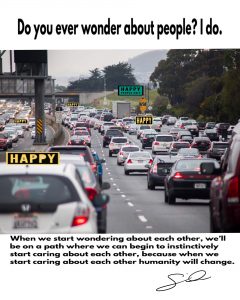 I live in Los Angeles, where driving five miles per hour on any freeway is kind of a “thing.” Yes, you read that correctly; that wasn’t a typo: F-I-V-E miles per hour. On a freeway. Any freeway. In L.A. If you don’t know anything about Los Angeles, I invite you to come and visit. I guarantee you will be talking about the I-405 when you return to home. The days us “natives” are going any faster than the normal five miles per hour on the I-405, it’s a must to look up, out of the front windshield (like you all do naturally, everywhere else…) just to check if there is a traffic angel carrying us along—because only an act of God can get traffic moving in LA. As much as we hate it, we jump on the freeway in full anticipation of what lies ahead—brake lights and thousands of slow-moving cars.

Not too long ago I was driving my kids to North Hollywood to visit with their aunt for a couple of days. The radio wasn’t playing, and the kids were on their devices. It was just me and the road as far as I was concerned, which is cool, because I am determined to be the one person on the road who is actually paying attention. (To all you texting-and-driving people out there, enough is enough! It’s way too dangerous out here.) With that said, I am a defensive driver these days. I have to be: I am traveling with precious cargo—my family—which means that I have four corners and two sides of my car to keep out of harm’s way. In more simple terms, I stay on alert. With my alertness, I scan the freeway, and the drivers.

But on this particular day, with the beautiful silence that filled the car, my mind started to wander. There was a red and yellow taco van in front of me that read, “.95 cent tacos.”

First, I wondered if the tacos were any good,

and then I wondered if the driver was happy.

I thought to myself, “Hmm…what a thought.” It seemed so random—and in fact it was—but in general, I think about people all the time. But to be thinking about the driver in this van, who I couldn’t even see? That was a stretch. If curiosity was a person, it would have popped out of nowhere, asking me, “Did you call?” Because within seconds, I started wondering about all the drivers that had passed me by, or were at a standstill next to me, or who were just flowing with traffic in the opposite direction. I started to wonder about their happiness, too.

I didn’t wonder about how many “followers” they had, or if by chance I was on the road with a billionaire, because those things just don’t matter. I wondered if they were happy and if they felt loved, because that is what we need more than anything in this life.

If traffic stopped, which—as aforementioned above—it does often, and the LED signs were on, I wondered how many miles apart I would find the Happy signs?

This is just a guess, but the LED lights on people’s cars would probably be flashing many different feelings and moods, because in some way, shape or form everyone is dealing with something.

After allowing my imagination and curiosity to run wild, I did the only thing that I could in that moment. I blasted a prayer from the four corners and two sides of my car covering every driver in the area and beyond.

There is so much that disconnects us. But if I can be on one freeway thinking about people by the thousands, you can take the time to think about the people that are within arm’s reach. You have the time to get curious about people you don’t know. Curious about what they may be feeling. And you have time, just like me, to send a silent prayer.

Being that we are all connected, it’s sad that we’re so disconnected.

I said a small prayer for all moving cars because happy people shine their light. And we are all in need of more light in the world.